Update time. I officially hit the road in Elvis (my new to me 2008 Prius) 2 weeks ago. I had EVERYTHING lined up. Or so I thought lol.

The official plan was to use a Thousand Trails membership as a way to beat the system, and camp unlimited (mostly) for the next year. And it can be done! Not by me however. I never shared this here prior for an assortment of reasons, but I suffered a major ischemic stroke in August of 2020, which took out my entire left side. After hospitalization & therapy however, I'm fully independent again, though walking and balance are still VERY difficult!

Which means staying at campgrounds within the Thousand Trails system was extremely tough, as they have an asinine rule that you MUST set up a tent, even if you sleep in your car, as I do. For an able-bodied person that's not such a big deal, but for someone who's deathly afraid of falling and is walking challenged, it's a major burden. Packing up the tent was an ordeal to say the least, and even when folded, it was about the size of a hula hoop, and took up WAY too much space in the car. The 1 campground I stayed at was gorgeous, but the rocky terrain and many other factors were too much for this body to handle. So...

I wound up cancelling my membership, and donated most of the camping gear I bought to Goodwill (boy is somebody going to get a great deal!) just to clear my car out. And then I discovered something. Something that I initially thought I'd HATE, and swore against. Stealth camping.

I can sleep & work out of the car. No setting up camp. Easy, smooth blacktop to hobble around on. Totally free. No worrying about CONSTANTLY scheduling 60 days in advance for a camping spot through Thousand Trails. Easy peasy!

Been staying at a Cabela's in eastern PA for about a week now with no issues. Their tremendous lot is only about 30% occupied at night, I'm guessing because peak summer season hasn't yet arrived. It's mostly car campers and million dollar RVs.

For showers, thus far, I've used 1 Love's, but didn't enjoy it, as it was a smaller Love's (think WAWA or 7-11 size) and didn't have handicap accessible showers. But the nice cashier didn't take my money when she saw I was using a mobility scooter, which was nice freebie! For sleeping though, Love's is another winner! Did about 4 nights there with the long-haul truckers & other car campers.

Planet Fitness has been my main shower choice, as most are fairly clean and open long hours. Some haven't been handicap accessible, but you take what you can get.

Walmart has been a LIFELINE! I work there in the daytime in the parking lot (sales related telecommute job), and can hop out to use their bathrooms when necessary. Good for picking up a few lighter items when needed to; bread, water, tools, etc. But for heavier shopping, I can't stand or pick things up, so their curbside pick-up is a dream! Just pull up and they stowe all your goods right into the car.

Found an emergency stealth spot one night on FreeCampsites.net, which was wonderful! It was in the overflow parking lot of a college. Highly recommend that website btw.

Not sure if I could do this forever in my shape - as was originally planned - but to grind it out for a year or two while I build up a nice nest egg is surely within my ability.

As for costs, if I wanted to live EXTREMELY tight (which I don't), I can probably get by on $600 per month or so. $800 makes things much more comfortable & bearable, which is what I'm after. Still, where in the heck can one live (all in!) for $800 per month aside from the worst ghettos out there?

Best investments so far: My Prius (cheap air conditioning & heat anytime I want, great fuel mileage, etc.), Tri-fold mattress I bought on Amazon (real comfortable!), Blackout window coverings I made (pain in the ass to construct!) but provide total concealment at night, Febreeze (to cover up those accidental urine spill odors when tinkling in the wee hours), Visible phone plan.

Most annoying things so far: CONSTANTLY having to juggle charging my 2 phones (one work, one personal), vape device and iPad. Sitting in a car for 12-16 hours per day. Having to time my bowel movements (haven't had to go #2 real bad at night yet - thank goodness! - but I'm hoping if/when I do that I'm reasonably near a Turkey Hill, Love's, WAWA, etc.!!!).

Well, you are definitely on your way, and I give you an A+ for pushing thru, adapting and going on.

Good luck to you, and keep us posted here.

Thank you for sharing so clearly and completely. I can picture everything. I too started out sleeping on the tri-fold from Amazon, and liked it a lot. 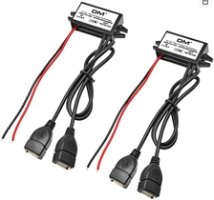 To avoid juggling devices, I bought this 12v to 5v USB power converter, and it's doing the job for everything. You could hook several in parallel to charge all your devices at once. And amazon has other models that plug into your cigarette lighter, avoiding the need to connect wires. 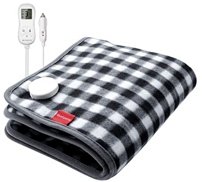 I also bought this mini 12V electric blanket and absolutely love it! It was 19F here a month ago. This little blanket plugs into the cigarette lighter and kept me toasty warm all night, drawing only a little current from the 12v battery. To use it, I wrap it around my chest and then put on a warm-but-comfortable jacket over it to keep the heat in. The medium setting was all I needed (plus long-johns and warm socks.)

Please take good care of yourself.

@TrailerManNJ - From me, also an A+ for your determination and adaptability, not to mention my mad respect. Thanks for the update!

Thank you for all the suggestions and SUPPORT...they really mean a lot. On top of going through a major stroke 1.5 years ago, I recently split from my girlfriend of 15 years, who's also the mother of my 13 year old son. So yeah, things have been tough, which is why I do appreciate the kindness here. Only a fellow nomad can truly understand why we live this lifestyle. For me, it's about 50% by choice, and 50% out of necessity. Thank GOODNESS I found Bob Wells years ago on YouTube in my healthier days!!! My plan - before the stroke - was to go fully nomad if life ever hit the skids; job loss, break-up, etc. So the 3 or 4 years of education & planning really made the transition easier after my stroke and breakup.

Back onto the kindness thing for a second. While the news channels profiteer by selling stories of doom, gloom & despair, and it seems that that's all we hear about nowadays, even in my early travels I can say that there's a LOT of good out there in the world. People who are quick to help another human being out. I HATE asking anything of anyone, but sometimes it's needed...especially as a disabled person. Whether it be somebody helping to open a door, lift something for me, etc., most people are good souls who're ready to lend a hand. Being on the road really opens your eyes to REAL life very quickly.

Couple of things to edit/add to my original post above...

*My stroke affected my RIGHT side, not my left
*Another best investment I forgot to mention: a cheap plastic tray that slips onto my steering wheel. This thing ROCKS!!! I use it to prop my tablet up while working in the daytime, and of course to eat all my meals on. When not in use it slides right under my tri-fold mattress in back of the passenger seat. Well worth the $15 I think I paid on Amazon for it!!!

Finally, I'm attaching a few photos of my set-up. Nothing earth shatteringly new (most stuff I learned here or on YouTube) but just to give everyone a visual. One pic shows my mobility scooter, which lives on the back passenger seat. On the floor lives my rollator walker, in case my scooter battery ever dies. The other pic shows my bed in the Prius, which I leave like that all the time. Next to the bed in the cargo/trunk area I have some plastic storage totes with things like medicine, wet wipes, etc. On the front passenger seat (not pictured) I keep another giant plastic tote with all my food, utensils, and so forth.

TrailerManNJ said:
I HATE asking anything of anyone, but sometimes it's needed...especially as a disabled person.
Click to expand...

And the ironic thing is that it may be the person asking for help who lightens the other person's day. I remember noticing that at university, of all places. (Maybe because it was a relatively high-pressure place? and a mostly commuter campus, so not terribly close-knit.) When somebody would say "hello, could you open that door for me?" or the like, it just sort of slowed things down and made life more pleasant. Like, here's something easy and uncomplicated I can do that someone will actually appreciate, yay! and that endless chatter in the back of your head stops for a minute. Nice.

Dude, your story is amazing.
F

People work & save their whole life to get to enjoy the "Golden years" then something happens to their health.
I broke my back at 49. You've done a Great job, Congrads! Your Wealth is your Health!

So "God Laughs"?
A line from the movie "Out of Africa" I'll never forget was spoken after a male lion attacked and killed their ox as they fought to drive him off. After it was over, a happy worker looked up at the woman in charge, and with a big smile proclaimed:
"God is happy, he plays with us!"

Similarly, the unforgettable line I remember from the movie "Oh God!" states:
"God is a comedian, performing to a world afraid to laugh."
You must log in or register to reply here.

B
Hello From the Midwest