"(Sittin' On) The Dock Of The Bay"
By Otis Redding

Sittin' in the morning sun
I'll be sittin' when the evening comes
Watching the ships roll in
Then I watch them roll away again, yeah


Looks like nothing's gonna change
Everything still remains the same
I can't do what ten people tell me to do
So I guess I'll remain the same, listen


Sittin' here resting my bones
And this loneliness won't leave me alone, listen
Two thousand miles I roam
Just to make this dock my home, now


I'm just gon' sit at the dock of a bay
Watchin' the tide roll away, ooh
Sittin' on the dock of the bay
Wastin' time


Sadly, this is the first-ever posthumous #1 single. He died in a plane crash at the age of 26 only two days after he finished recording the album this was on.


I sang this (2 myself) every day I was overseas. I still sing it & the now puppers sing along

Guy Clark, LA Freeway
"Down the road in a cloud of smoke to some land I ain't bought ..."

Guess this falls under "etc.", but it's good tuneage while knocking back the miles on the road,,,

He is a great guitarist, but how did you connect that song with nomads or homelessness? The name of the motorcycle? Couldn't find the connection in the lyrics.
P

Life on the road you say? ... a friend, Charles from old-home, wrote this tune about living on the road...

Life Is a Highway Lyrics​

[Verse 1]
Life's like a road that you travel on
When there's one day here and the next day gone
Sometimes you bend, sometimes you stand
Sometimes you turn your back to the wind
There's a world outside every darkened door
Where blues won't haunt you anymore
Where the brave are free and lovers soar
Come ride with me to the distant shore
We won't hesitate
To break down the garden gate
There's not much time left today, yeah

[Verse 2]
Through all these cities and all these towns
It's in my blood and it's all around
I love you now like I loved you then
This is the road and these are the hands
From Mozambique to those Memphis nights
The Khyber Pass to Vancouver's lights
Knock me down, I'm back up again
You're in my blood, I'm not a lonely man

[Refrain]
There's no load I can't hold
The roads are rough, this I know
I'll be there when the light comes in
Just tell 'em we're survivors

[Refrain]
There ain't no load that I can't hold
The roads are rough, this I know
I'll be there when the light comes in
Tell 'em we're survivors

I'm surprised nobody shared On the Road Again, by Willie Nelson. Maybe because it is about a band (rather than ordinary folks).

Willie Nelson – On the Road Again

Willie Nelson starred as an aging rocker in the film Honeysuckle Rose. While on an airplane flight, he was asked to write a song about ‘being on the road’ for the film by director

Carla618 said:
I'm surprised nobody shared On the Road Again, by Willie Nelson. Maybe because it is about a band (rather than ordinary folks).

Willie Nelson – On the Road Again

Willie Nelson starred as an aging rocker in the film Honeysuckle Rose. While on an airplane flight, he was asked to write a song about ‘being on the road’ for the film by director

I did a cross country motorcycle ride on my 1947 H-D right after that came out, I met up with a guy on another bike that had a stereo, he played it regularly when we stopped or were on slower roads. We ended up riding together for 3 days. I always remember that ride when i hear it.


OK, not a song, and not highways, but this has long pinged some deep part of my consciousness and the underlying feeling and perhaps genetic hardwiring has long been a part of my life and lifestyle and seeking adventure.


The Call of the Wild​

Have you gazed on naked grandeur
where there's nothing else to gaze on,
Set pieces and drop-curtain scenes galore,
Big mountains heaved to heaven,
which the blinding sunsets blazon,
Black canyons where the rapids rip and roar?
Have you swept the visioned valley
with the green stream streaking through it,
Searched the Vastness for a something you have lost?
Have you strung your soul to silence?
Then for God's sake go and do it;
Hear the challenge, learn the lesson, pay the cost.

Have you wandered in the wilderness, the sagebrush desolation,
The bunch-grass levels where the cattle graze?
Have you whistled bits of rag-time at the end of all creation,
And learned to know the desert's little ways?
Have you camped upon the foothills,
have you galloped o'er the ranges,
Have you roamed the arid sun-lands through and through?
Have you chummed up with the mesa?
Do you know its moods and changes?
Then listen to the Wild -- it's calling you.

Have you known the Great White Silence,
not a snow-gemmed twig aquiver?
(Eternal truths that shame our soothing lies).
Have you broken trail on snowshoes?
mushed your huskies up the river,
Dared the unknown, led the way, and clutched the prize?
Have you marked the map's void spaces,
mingled with the mongrel races,
Felt the savage strength of brute in every thew?
And though grim as hell the worst is,
can you round it off with curses?
Then hearken to the Wild -- it's wanting you.

Have you suffered, starved and triumphed,
groveled down, yet grasped at glory,
Grown bigger in the bigness of the whole?
"Done things" just for the doing,
letting babblers tell the story,
Seeing through the nice veneer the naked soul?
Have you seen God in His splendors,
heard the text that nature renders?
(You'll never hear it in the family pew).
The simple things, the true things,
the silent men who do things --
Then listen to the Wild -- it's calling you.

They have cradled you in custom,
they have primed you with their preaching,
They have soaked you in convention through and through;
They have put you in a showcase;
you're a credit to their teaching --
But can't you hear the Wild? -- it's calling you.
Let us probe the silent places, let us seek what luck betide us;
Let us journey to a lonely land I know.
There's a whisper on the night-wind,
there's a star agleam to guide us,
And the Wild is calling, calling. . .let us go. 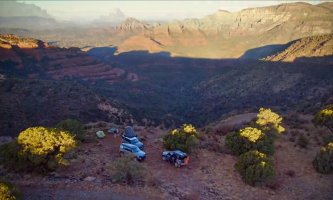 Rejection, PTSD and a song about being a nomad

What has nomad life taught you about yourself?