Note: This is an initial impression, at this point mostly experience charging with solar. I intend to update as I test it more thoroughly.

The FFpower CN505 power arrived in the original box, with original packing seals, all complete and new - showing state-of-charge at 83%.

I charged it from that 83% condition, starting at about 2:30PM, under a clear sky, not far from Las Vegas Nevada, using an Elecaenta 120W folding portable solar panel. The Elecaenta panel came with an adapter that matched the DC5525 charging input on the FFpower. The air temperature was around 75 Degrees, with completely shaded surface temperatures, measured with an IR thermometer, at around 80 degrees or slightly less. I stopped charging at 99%, with 12 minutes estimated to full charge. The final case temperature (FFpower completely shaded behind solar panel) was around 100 degrees, or a bit less (depending on where measured), measured with the same IR thermometer that registered just under 80 degrees in nearby completely shaded areas.

It began charging at 61 watts for a few seconds, then quickly reached 81 watts (MPPT adjusting), where it sat for a few minutes, alternating with 80 watts, before settling down to 79 watts for the remainder of the test. This is roughly consistent with the specified 85 +/- 5 watts MPPT charging rate. Since this 79 watt charging rate was not very sensitive to precise solar panel orientation, I believe that the FFpower, not the panel, was the limiting factor, though the FFpower charge controller might have done slightly better with a higher voltage panel (the Elecaenta panel is rated at 18 Volts, though Open Circuit is closer to 21V). Although the panel had been heating in the sun a few minutes before the test started, it was probably still approaching equilibrium temperature, and panel voltage drops at higher temperature. Likely, very slightly better charging wattage would have been obtained on a cold day, and slightly worse on a hot day.

Here is the approximate charging experience during this short test (some times may be off by 2-3 minutes):

A quick examination of these numbers shows general consistency with the FFpower's rated Wh capacity, and a roughly linear charging profile. They are just one limited experience.

I do note that the inverter (no load) gives ~114V, while our household AC (measured on same meters) is ~121V. That should be OK, but I will update after testing under load on various devices. The frequency reads at 60.1 Hz, which should be fine was well.

AUgie the Prospector said:
I believe that the FFpower, not the panel, was the limiting factor,
Click to expand...


AUgie the Prospector said:
though the FFpower charge controller might have done slightly better with a higher voltage panel (the Elecaenta panel is rated at 18 Volts, though Open Circuit is closer to 21V).
Click to expand...

A published efficiency curve would tell (part of) the tale, but SG's are typically "black boxes" and no such info is provided. The target audience isn't interested in such things -- present company excluded, obviously.

A variable voltage bench power supply (or even a 19v laptop charger) could help unveil some of the mysteries.

Welcome to the forum.
J

For mppt to work for maximum performance the panels need to be in the 36 volt or higher range. The 80 watts your getting is about average for a 120 watt 21 volt panels with either pwm or mppt (about 6 amps) . (80watts /14.6 volts = 5.47 amps) . Mppt on a higher voltage panel would get the full wattage of the panel in the best conditions. The limiting factor is the low voltage panel, but it should not be a problem unless you need to fully charge the battery everyday, where a larger higher voltage panel would take advantage of the mppt circuitry.

This is a picture of a 365 watt 40 volt panel taking full advantage of the mppt circuitry. It was able to produce 375 watts (sun overhead) about 26 amps. 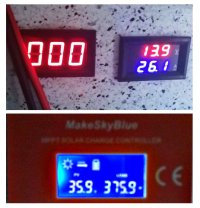