One of my brothers was going to go to Happy Camp today but, when we talked last night, he said SR 96 was blocked both north and south of Happy Camp.
A

Overnight showers have cleared the Smoke and cooler temps arrive

There is a very large fire near Yreka and now another fire inside a big bend on 96 reaching both sides of the large bend and that fire is the one closest to Happy Camp. Fortunately the wind is presently not pushing it towards Linda. The roads south from the town and the narrow road heading north out of the town that goes to Oregon are not shut down.

You can see where the fires are on the Cal fire incident map. The wind direction information is found on weather sites.

There are at least10 active wildfires in California today. As lighting is in the forecast for areas in Northern CA the Forest Service says it is possible that storm system may create more even more fires.
Last edited: Aug 2, 2022

The glass doors are protected by the ramp when it’s up. Thing is like a tank solid...

Wow, you sure do treat Kira like a princess providing her with such a huge doghouse! Good thing she likes you enough to let you share it with her. Of course she does needed you along to cook treats and dispense back scratches

The LTVA enforcers won't be forcing you to leave YARC camp this year!
Last edited: Aug 2, 2022
A

Eat to Live Do Not Live to Eat

I am looking at a Ford Transit Medium Top Cargo Van. Prices for new are stupendous. I am not handy enough to do the conversion myself. Phoenix AZ area.
M

Lots of people are doing minimal for labor setups for camping. Building materials and skilled labor cost being so high is creating the "this will have to do" builds.
M

Today is my 2 year, full time vaniversary! Not that it was my 1st time doing a lot of car/van/tent camping. I have been doing that for more than 50 years.

Congratulations Maki2... your a natural out there. Like you’ve been doing it forever.
Well I’m retired from one of my jobs... 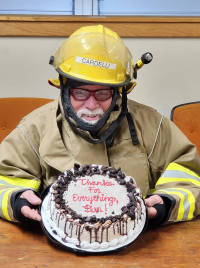 Congratulations, you and Kira have a lot more adventures in store!
M

How many more hats are you still wearing? At least you can hang that one up ..for now.

Thanks all... yeah Maki2, still the township maintenance guy. No one wants it cause they think it’s to much work. But two interviews next week (Monday).
M

Update on rodent story. What was going on is after heavy thunderstorms the ground surface here has so much volume of rain in a short time that there is standing water for a half hour or so. Not deep water but it is sufficient to flood out rodent tunnels. So the rodents come up to the surface and look for something to climb to get high as well as dry. That means up the tires and into vehicle engine compartments. So most everyone in camp has been getting them in there. But I was the first to discover a nest. In my case it was not a mouse but a rat. She nested on top of the transmission right next to the engine. The wire to the electronic transmission control unit was actually inside her nest so it got gnawed partially thru. Maybe she thought it was one of the sticks she had hauled in? Anyway when I went to back my car out I heard a clunk as the automatic transmission dropped into reverse and then clunked again when shifted into drive. I popped the hood to see if my transmission fluid was low and discovered the nest. Cleaned it out, found the chewed wire. Waited until morning to deal with the situation but got a trap from a fellow camper and caught the rat that same afternoon. I did the very slow speed drive into town to the first repair shop which was the Honda dealership which was good as my car is a Honda. It has been there a week. Not the dealership issue, my insurance company was the slow motion holdup. But it is all sorted out now and finally fixed. Just waiting on the dealership person who gives transport to customers person to come pick me up after he gets done with another client.

Everyone in camp is now taking precautions against the rats and mice using rat sized sticky traps under the hood baited with a really tiny dab of peanut butter. So far the count of caught mice is now at 3 plus my rat that was caught in a spring trap.

As I had to empty my car of valuables like tools and such it has been very crowded in my trailer. I knew it was not going to be back to me in a day so I stocked up on water in 6 one gallon jugs using the dealer's water supply when I dropped off my car and the driver did not mind bringing them back to camp with me. Fortunately I had enough food on hand. Fellow campers I had previously met at a HOWA caravan last fall helped by dropping my Etsy outgoing orders into the mail when they went into town.

Not a financial issue as my vehicle insurance covered the cost and no strikes against me that effect my premium. However I will now take the time to set traps in the engine compartment and check it everyday.

By the way some of my fellow campers did the peppermint spray thing and still got mice. It is not to be relied on as a deterrent. One used that and then tried a sonic device and that did not work either. The sticky traps did catch the critters. He got 2 on 2 consecutive days. I set a sticky trap last night in another friend's engine compartment and she had a mouse stuck on it this morning. One of the guys removed it for her and killed the mouse. Fortunately I am not that squeamish that I can't deal with such things. I do not like dealing with rodents but I am tough enough to get it done.
C

Did you ask the Honda dealership about the capsaicin tape for your wires?

maki2 said:
Lots of people are doing minimal for labor setups for camping. Building materials and skilled labor cost being so high is creating the "this will have to do" builds.
Click to expand...

I've been keeping my eye on the pricing for largish teardrops (15-16 ft), they're starting to come down. I passed by an RV lot today that was almost empty last year but it's packed today and they have a "SALE"! banner up. When prices get more reasonable again, then I'm going to finally buy one. For me it's a better fit then buying a van...

I’ve got my share of mice here. No rats thank goodness. But the mice multiply very fast. I’ve found several nests... Kira did anyways. She as good a mouser as any cat. Plays with em like a cat too sometimes.
Amazing how fast they can build a new nest... very resourceful critters.
Beautiful day here... sun out... light breeze... visited old uncle David 92 years young. He can barely walk, but he was out hooking up his blade on his tractor to grade his road... little old ford tractor. Crazy old guy... I’m going to be worrying tomorrow that he could fall off.

Honda used soy-based insulation on its wiring harnesses on some vehicles and got sued for it.

The Honda dealership does not sell hot red pepper coated tape to put on wires. But I have something similar I ordered from Amazon already waiting for me at the Flagstaff hub counter. I will pick it up tomorrow when I go into town to ship out some Etsy orders. The guys at the dealership reminded me to wear gloves when handling it and keep my hands away from my face, not to get it on my clothes either. They said they hate having to work on cars that have the pepper stuff on the wires as it makes for a frustrating and risky job.

My 2006 Honda Element predates the soy coated wiring years Meaning I do not have wires made with soy, So that issue that was completely unrelated to the rodent chewing on the wire.

The dealership did a full inspection on my car and the chewed wire was the only thing wrong they found on it other than mentioning before too long the engine and cabin filters could be changed. Not clogged up but showing some dust in them. No surprise there, the gravel road at the last camp on Dog Town road was fairly dusty as the monsoon season rains had not yet begun. I change them myself, simple enough once I learned how to access the cabin filter by taking out the glove box. Thanks to youtube for teaching me how.

The guys at the Honda dealership said spray some Tabasco around instead of buying expensive products. That locally another effective deterent that gets used is synthetic cayote urine. The rodents hate the smell of both thingsand unlike peppermint oil those smells are long lasting. This afternoon I purchased a bottle of Louisiana hot sauce, the first ingredient is peppers. Tabasco's first ingrediant was water. Besides the Louisiana hot sauce was a much bigger bottle for half the price. Of course neither one is water resistant. However the gardening centers sell a product for making non toxic rose and other plants spray that does have some water resistance. That and cayenne pepper mixed into it would create a good DIY, non toxic, affordable deterent.
Of course in an emergency when out camping pcould keep the rodents at a distancce.
I plan to skip the cayote urine. But of course it might attract cayotes to come and lift their leg to pee on my ties. But I figure a dog could produce just about as good of a smell. So all you folks who get upset about dog piss on your tires remember the dog might be doing you a favor! You dog owners now have a great reply to compliants about that situation, hey don't worry, it keeps the mice away